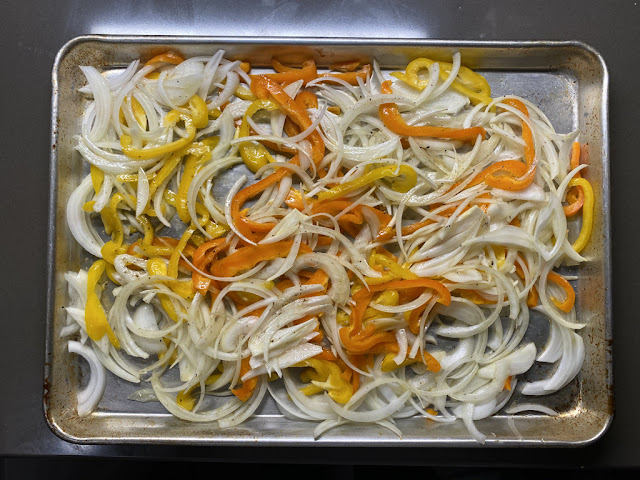 Author's note:
Here’s a sausage sheet-pan supper featuring sweet bell peppers that practically melt in the over’s high heat. In this recipe, the sausages are roasted directly on top fo the peppers, so the vegetable can absorb all the brawny, porky juices. Then both vegetables and susses are piled onto fresh arugula leaves, some of which wilt on contact while some stay crisp and salad-like. A garnish of crumbled ricotta salt adds a milky, funky note, while a dressing made with red wine vinegar and fresh oregano is both earthy and tart next to the sweet and supple roasted peppers. Seek out a variety of different colored peppers for the prettiest dish. And if you can’t find ricotta salt, substitute feta, though maybe use a little less since it’s saltier. A loaf of crusty bread is all you need to round this out.

My note:
I think we made this 3 times. Twice with Beyond Meat sausage. It's better with the real sausage. This calls for 1 pound of sausage, but we just do 1 sausage/person. The recipe tells you to use 1 red and 1 yellow bell pepper. But I know for a fact that the green one is the cheapest at Trader Joe's. And not by a small margin. Also, what's ricotta salata and where do you find it?

2. In a bowl, toss the peppers and onion with oil, salt, and black pepper. Spread the vegetables out in a single layer on a rimmed baking sheet, and roast until they are limp and soft but not caramelized, about 10 minutes.

4. Meanwhile, in a medium bowl, a combine the vinegar and oregano.

5. Before serving, toss the peppers, and onion with the vinegar mixture. If you’re using the arugula, divide it among individual serving plates, and sprinkle with a little olive oil and a few drops of red wine vinegar. Arrange the peppers, onions, and sausages over the arugula, if including. Sprinkle with the cheese, and serve.
Labels: food