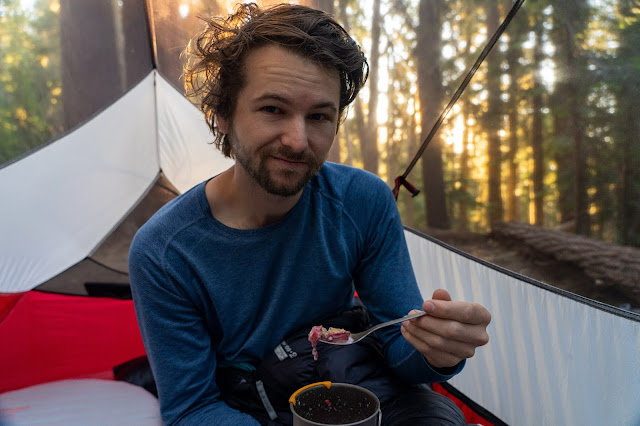 Yikes. They weren’t kidding about Devil’s Dream being buggy. In the time that it took us to set up our tent and jump in, Alex’s back got bitten through his shirt. His back looked like it was covered in boils.

Needless to say, we had breakfast inside the tent. I got geared up in wind pants and rain shell and got our food bag. I had oatmeal and Alex had skurka cereal. Alex rates the cereal 4/5. Oatmeal was terrible. I’m used to having oatmeal packets on the PCT and god damn they’re good. Those Quaker people put in some R&D to make it taste so good in so little time. This was my first time trying to make my own mix. It had dehydrated berries, and it didn’t really work well with boiling oatmeal. It tasted really acidic, like the berries were very old and moldy fresh berries. I’ll try to not boil it so much next time. 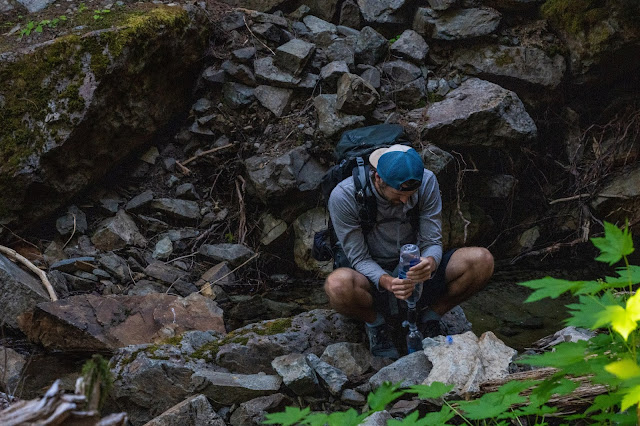 We finished all our food before Longmire! YAY. We packed up as fast as we could and started hiking at 7:20.

On the downhill to Longmire, we stopped for water at a bridge. The water was so clear and there was so much of it, I was like, “hey Alex. Can you get a video of me getting water?” He got the camera and started recording, but then I ruined the shot by completely taking up the whole frame. He was like, “you stepped into the shot.” It made me laugh so hard, I nearly peed myself. You had to be there. 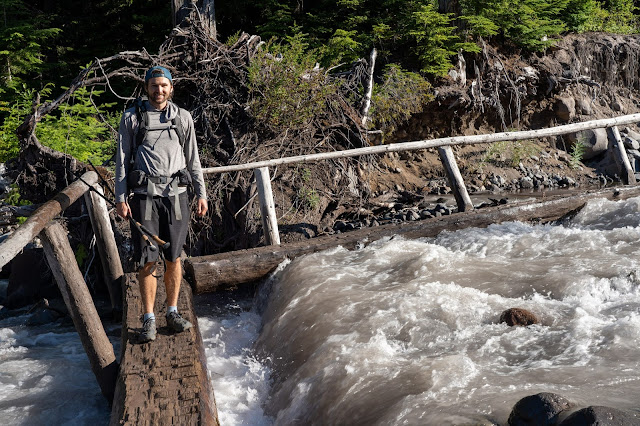 Listening to Taylor Swift’s new album - folklore! I had cached it so that my first time listening to it would be on the trail, but hadn’t gotten a chance. I didn’t want to make it to the resupply without giving it at least one listen. I was 2 songs away from finishing it when we rolled into Longmire at 9:55.

We sorted out the resupply first by rebalancing the food. Alex took the bear can, I took half of the food and both of the battery packs. Alex is getting the worse end of this stick. I had picked up a mask someone dropped on the trail. I was going to wear it into the general store. But then this girl spotted me and she was like, “did you pick this up on the trail?” So I had to give it back. She and her dad (or grandpa) were going to the restaurant for breakfast. I didn’t even know that was an option. But as it turned out, it wasn’t an option.  Breakfast hours were over, and lunch was not going to start for 2 hours.

Alex got to use a flushing bathroom (the granola in the cereal makes him fart, so we packed out extra toilet paper), and I got to wash my socks with soap.

With clean socks and empty bowels, we headed to the general store. They had ice cream! That’s all I wanted anyway. Alex got a cold cream soda and I got Dibs. We sat outside looking clouds passing over Mt. Rainier. It’s SO big. 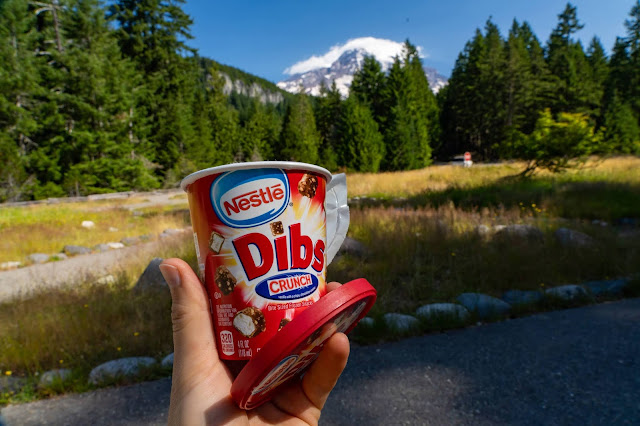 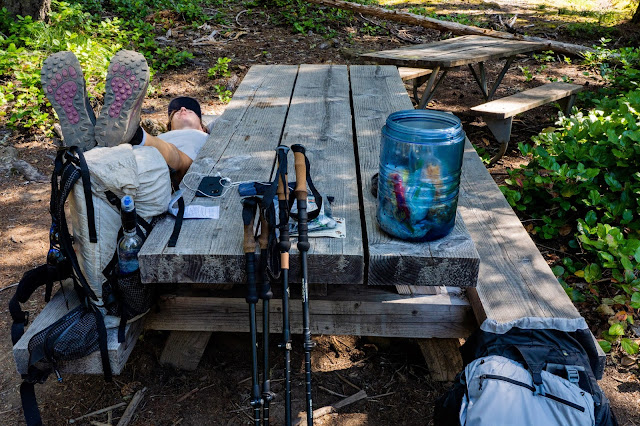 We have been leapfrogging with this guy (I’m betting his name is Jeff) the whole trip. He has a way of coming off really condescending when he talks, I don’t know if he knows it. He’s always watching something on his phone at camp and he was really worried about being able to charge his battery pack in Longmire. He had gotten there in time for breakfast and they let him charge and he was being really smug about it. He asked us what we did with our resupply bucket and we said that we used a bear bin and we’re carrying it. He was making fun of us for carrying an extra 4 pounds. He’s just jealous he didn’t have the same idea. 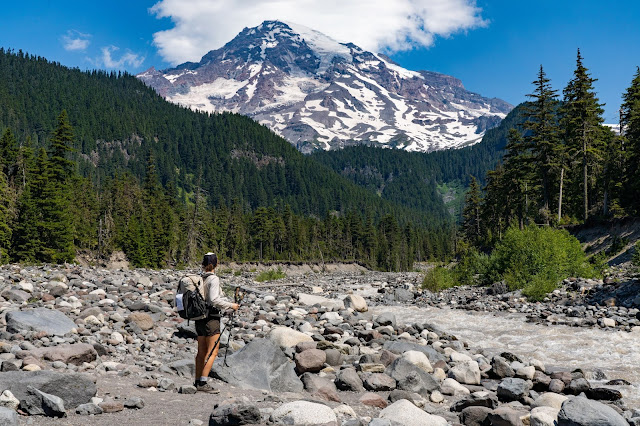 We were back on the trail at 11:20. The first part was pretty easy. The trail goes along the road until the trail crosses niqolomie river. There were several people there taking pictures with the awesome view. Then we started climbing up to Paradise. It was pretty gradual at first, until it wasn’t. We had planned to take a break for ramen and snacks, but Alex didn’t like any of the spots for stopping. We finally stopped about 2/3 of the way done with the climb.

Had ramen and snacks. Jeff passed us while we were stopped and so did this dayhiker lady. She stopped and chatted with us and was so so sweet. She lives in Colorado, but originally from South Korea. She was really worried about our backs with the heavy backpacks. 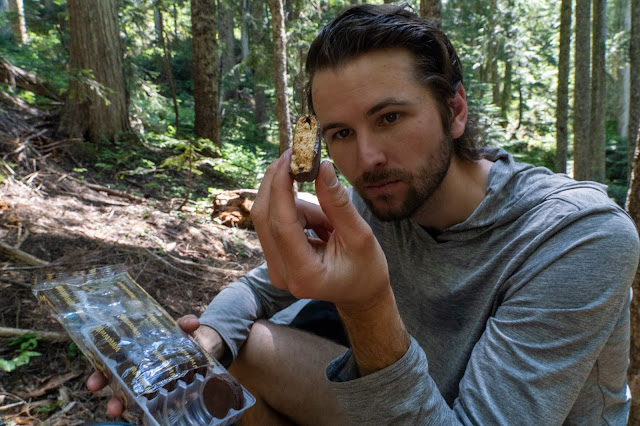 There were a couple of falls that I would want to go back to if we came here again, but we just wanted to be done with the climb. I had an idea of calling our house the Braj Mahal (borrowing from Workaholics), but Alex didn’t like it.

Finally, at the top, the trail widened and we got to hold hands and chat. I was expecting a huge number of day hikers, but there weren’t that many. We walked by Reflection Lake, which was beautiful, but not still enough for a good reflection. The road walk was kind of fun and only 0.2 miles. 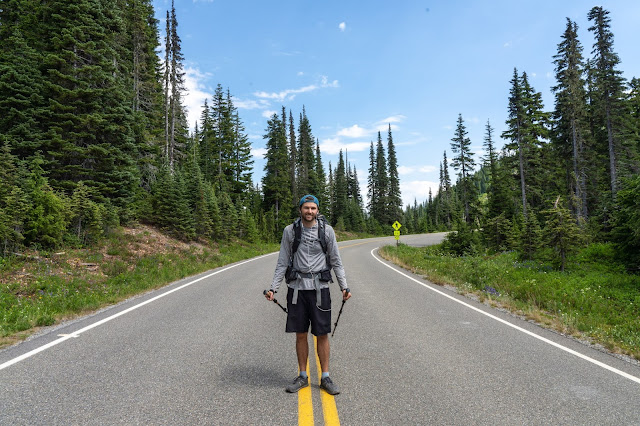 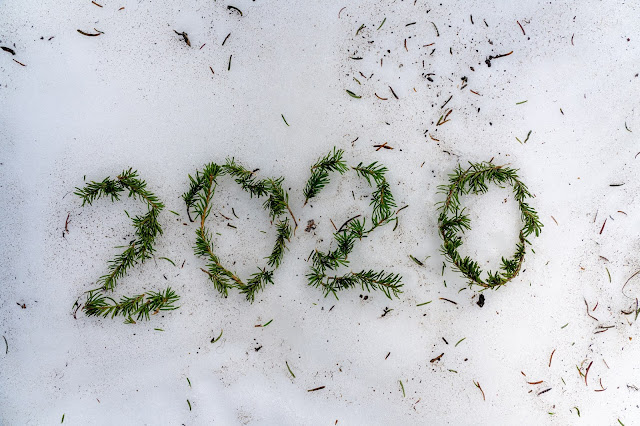 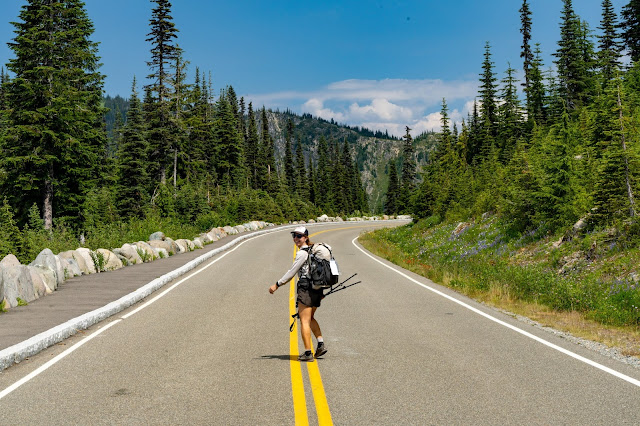 On the way down, we traded mosquitoes for biting black flies. It was a grueling downhill to camp. I don’t envy people going clockwise on this hike. It was hot and muggy today, too. 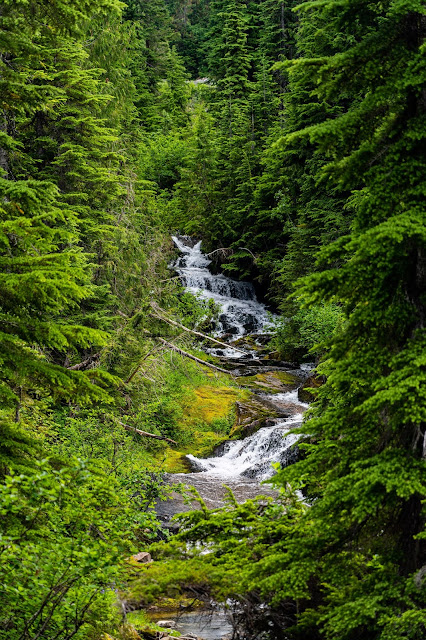 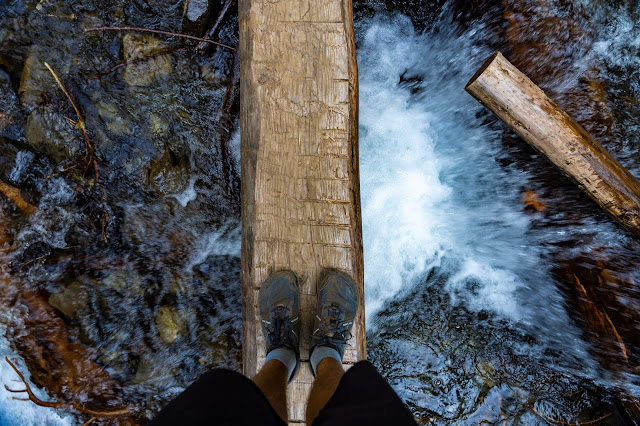 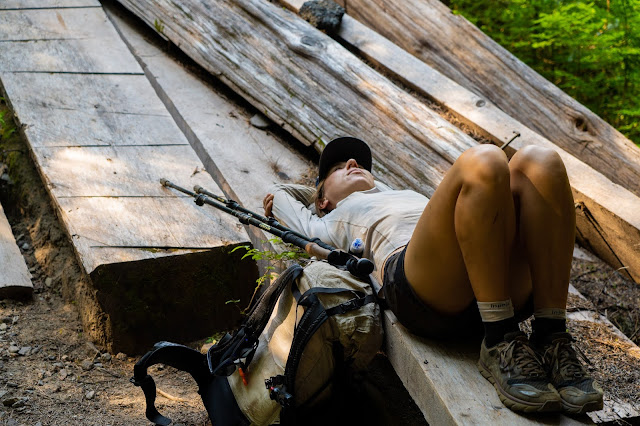 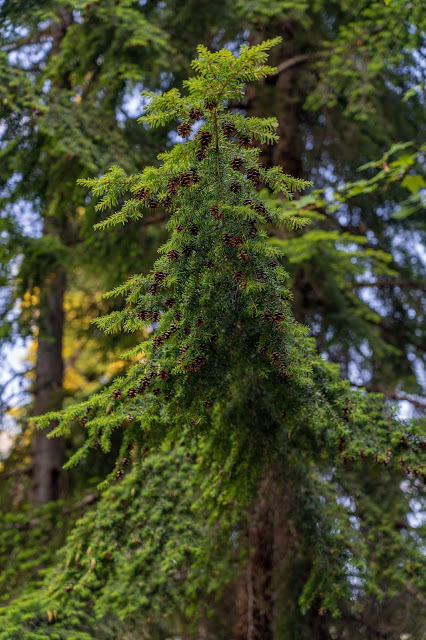 There was a section of the trail that was washed out and a little sketchy. 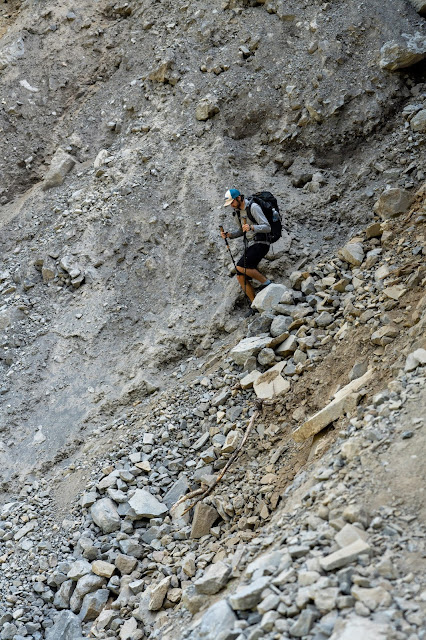 We finally got to the campsite at 5:20. There were people chatting on the rocks of Maple Creek. Love to see that.

We set up our tent and walked down there to get water and to get away from the flies. One of the people on the rocks was Jeff! I didn’t recognize him without his deep v forest green shirt. He was holding court with 3 ladies on day 3 of the trail. Love to see it. 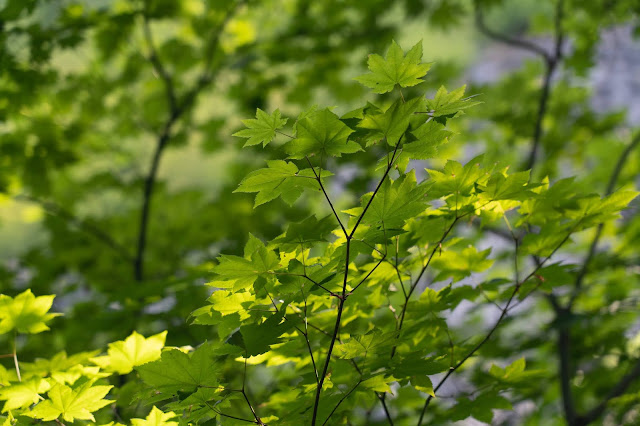 I got to ice my legs in the creek and Alex washed his hair. We stayed there until everyone else left when the sun set behind the mountains and stayed some more. It was soooo nice to watch the water and relax on warm rocks. Out of nowhere Alex goes “fuck these flies. What the fuck. When did flies become a thing?” It made me laugh so hard.

Back at camp, Alex made rice and beans and I wrote this. I accidentally packed extra cheese in the resupply, so it was like a rice and beans fondue. The cheese was a little moldy, too. Yay backpacking food. (I can’t wait for real food again.)

We are putting the rain fly on our tent for the first time on this trip. We checked the weather forecast at Longmire and it said 20% chance of thunderstorms and rain showers tonight. It’s soooooo hot and humid here. We are both laying in just our underwear and still SO hot. Really glad we brought insulated pads and sleeping bags rated to 4 degrees Fahrenheit. 🙃 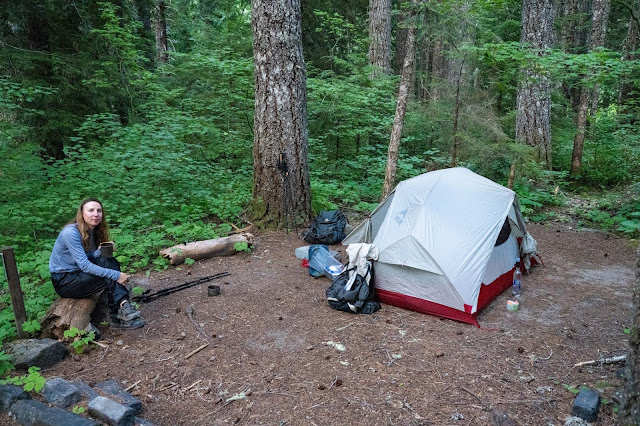