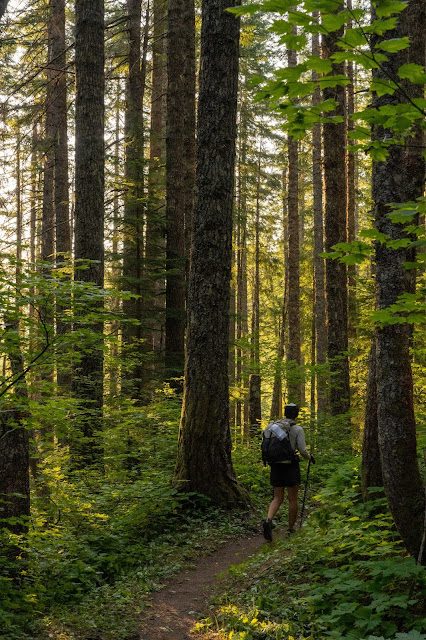 Last night as we were chatting, I realized that this Creek was called Maple Creek because there are maples allllll around. The leaves are impossibly green when you look up at them.

Woke up a little before 6. I had slept soooo well. Like, I was confused where I was when I woke up. We both had really weird dreams and we were recounting them half asleep. When we looked at the phone, it was 5:59. I got up to get the bear can and start water for oatmeal.

We sorted through the food while water boiled.  Today I got oatmeal and blueberry oatmeal. I was really trying to not boil too much water and it was a lot better.

Alex came up with a rating system for hiking difficulty. It is (elevation gain + elevation loss) /  (# miles * 100). This makes our hardest day day 4. But it also makes our last day, that we both thought would be a breeze pretty hard. I can’t tell if it’s genius or really stupid. At the very least it probably does a good job of predicting how hard the hike is per mile. Not sure about the day overall. Alex just said “isn’t it a great rating system?” Hahahah. This guy.

I pooped in the camp toilet. It was a no walls kind of throne. When you open the DOUBLE lid, it’s exactly what you’d expect. Alex filled up water before we started hiking at 7:15. 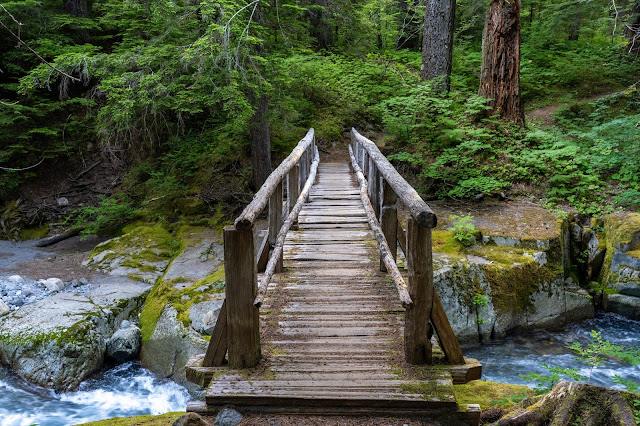 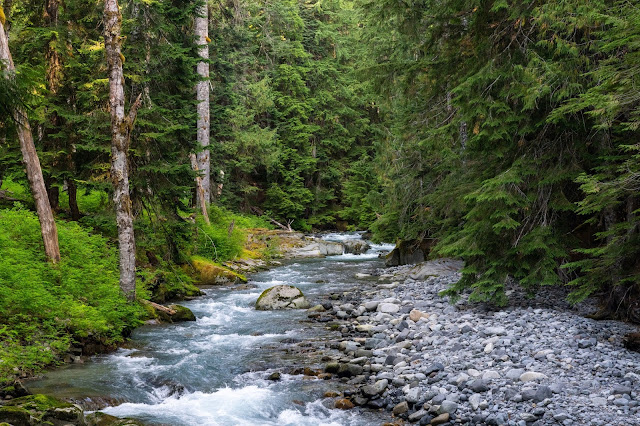 There was a mile long descent to Stevens Creek. Then we started climbing toward Box Canyon. We had seen on the map that the trail goes over a tunnel, so it was exciting when we saw it. I wasn’t expecting much from Box Canyon, but holy shit it was SO cool. It’s like a gorge or a slot canyon where the water cut through bedrock so deep that the canyon is really deep.

We were hoping to get rid of some trash, so we went to the parking lot. Turns out they have trash, water, and a flushing bathroom - the trifecta. I brushed my teeth and Alex pooped. We ran into the girl and her dad hiking the trail. Her name is Chelsea and her dad is Steve. We chatted a bit because she was waiting for the bathroom to reopen. The dad is doing the PCT in sections, and Chelsea is hoping to do the whole thing next year. Yay! 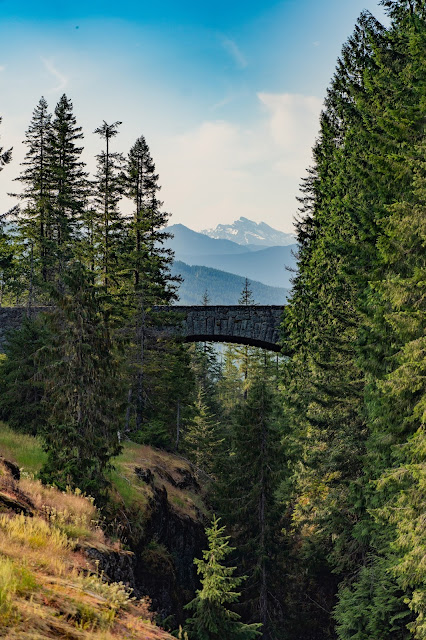 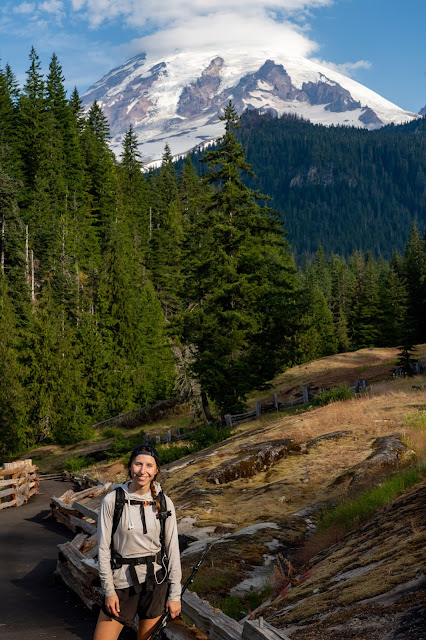 We got back to the trail at 8:58. Filled up at the last water source until camp. It was nickel creek and we kept singing “look at this photograph” leading up to it. We were pretty much at our water capacity - 3.2 liters for 2 people. It’s definitely cutting it close for the long climb on a hot day. We ran into a guy who said it he needed 3 liters to get down from Indian bar to nickel creek. He also said he saw a bear.

With the knowledge that a bear could be anywhere, we took out our earbuds and climbed. It was pretty steep, really hot and sticky, and there were mosquitos and biting flies all around so we couldn’t even stop. They kept aiming for my ears and eyes, too. Super annoying.

I think we saw Mt. Hood. After 5-ish miles of climbing, we finally stopped for a snack break. It was a cool meadow with a view. Alex wiped me down with a deet wipe while I got the snacks out. We ate the last of our stale Kirkland Signature nut bars. Yesssss. When we were getting up, I asked Alex if the bars raised his spirits and he said “no... actually, yes”. 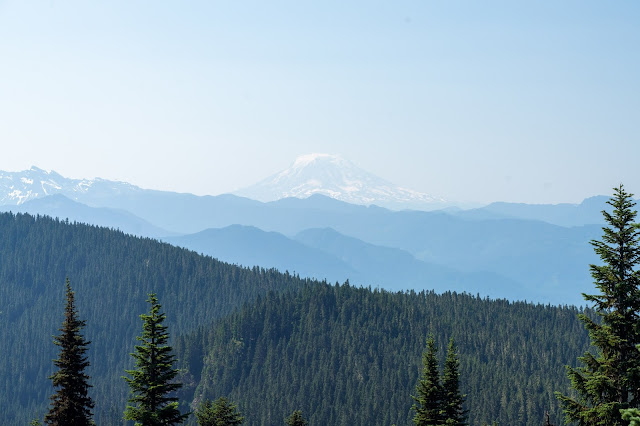 Less than a mile later, we spotted another great resting spot and decided to take a break. We took off our packs and sat on the logs listening to forest noise: wind, birds, and god damn flies. We whispered when we had to talk because the silence was so nice. 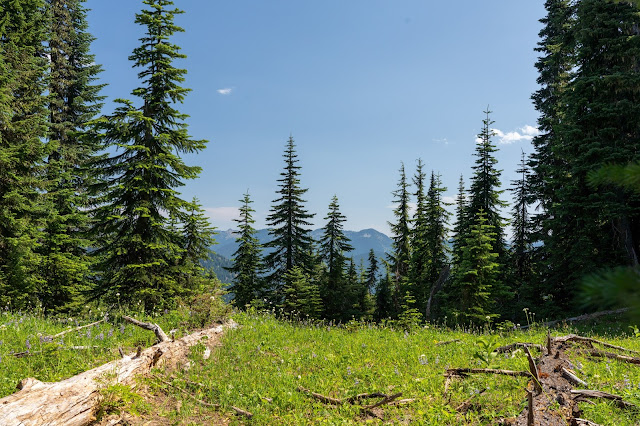 Finally, we reached what we thought was the top. It had an insane view of Mt. Rainier. We took so many pictures and a time lapse of clouds forming and dissolving around the mountain. Chelsea and Steve caught up with us then. I took pictures of them. 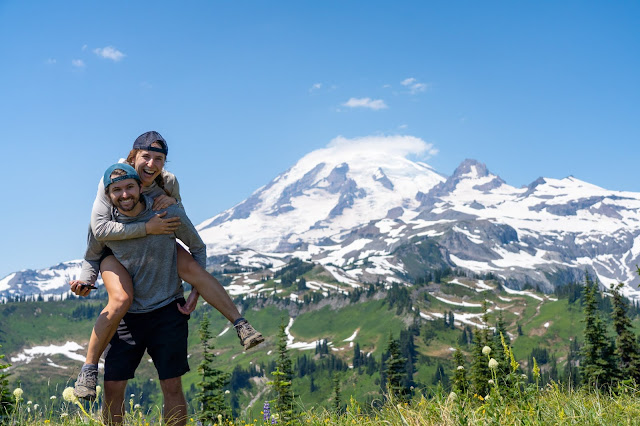 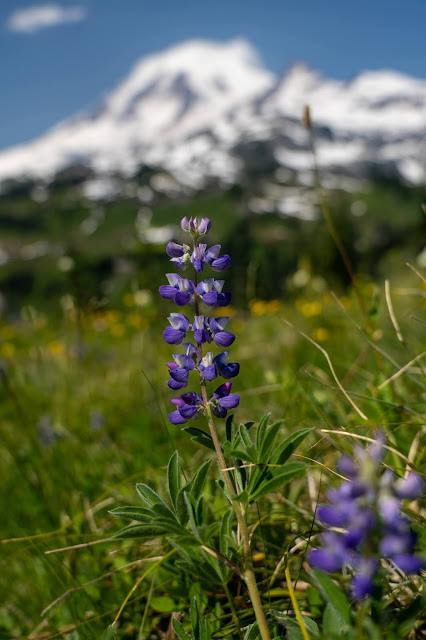 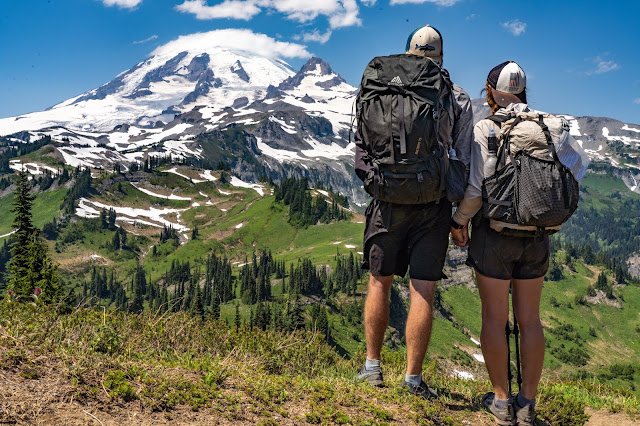 After a teeny downhill, we started climbing again. Sandy terrain and steep. And then, finally the top and the best view of Rainier. We stopped to take more pictures. 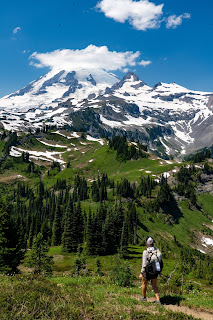 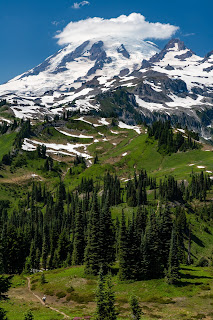 Finally we descended down to camp. I saw the wood shelter cabin at camp, and then A BEAR! We sprinted down to see it up close. 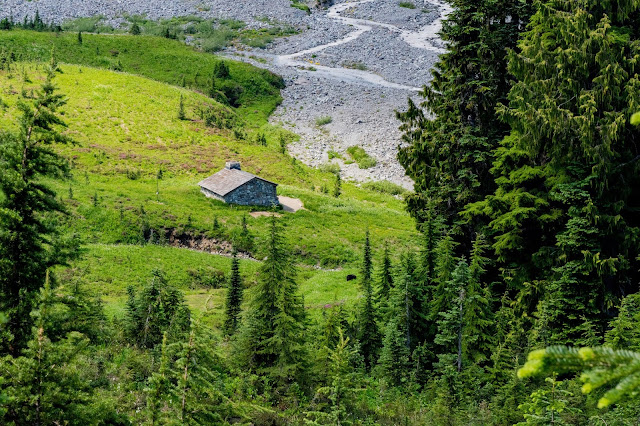 It was just foraging and not giving two fucks about us snapping away. We stayed there for maybe 30 minutes just watching it. At 2:44, we finally put our backpacks down at camp. Walked around all the campsites to check them out. The best one (2) was already taken, but it’s cool. We took 1, it’s the closest to the trail. All the campsites are really nice and private, but 2 has a view. 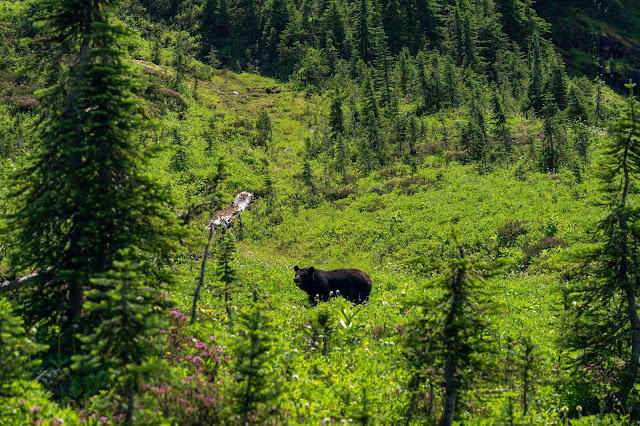 We ate ramen, 2 fruit snacks, and a bar. It was hard to get up again, but we had to get water. We hung out by the stream taking pictures, and I listened to Bad Blood. It was sooooo hot and the sun was really bright. I had left my sunglasses at Maple Creek camp (womp).

At 5-ish we headed back to camp to get in the shade. We are in the tent hiking from the bugs. Going to make an early dinner so we can get an early start tomorrow. Alex and I both fell asleep here and I woke up with a raging headache. :( 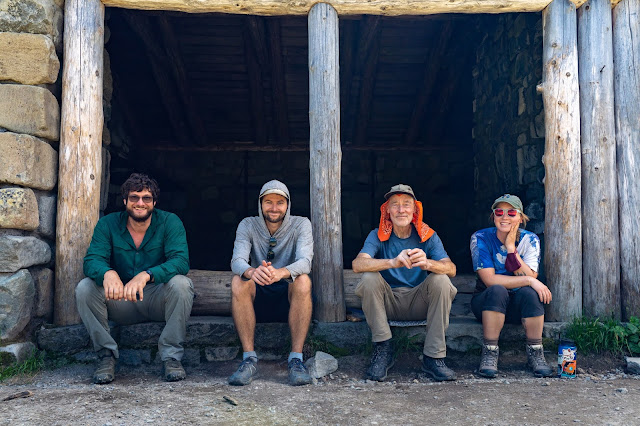 Got up to take Advil and start water for dinner. Walked down to the river to eat dinner. I was not hungry and kind of out of it with my headache. All of sudden we heard a loud whistle. It was Steve. He was motioning up the hill. They saw a bear. Ran up to Chelsea and she said they saw a bear go up toward the camps. Did we have bear spray? Hah no. 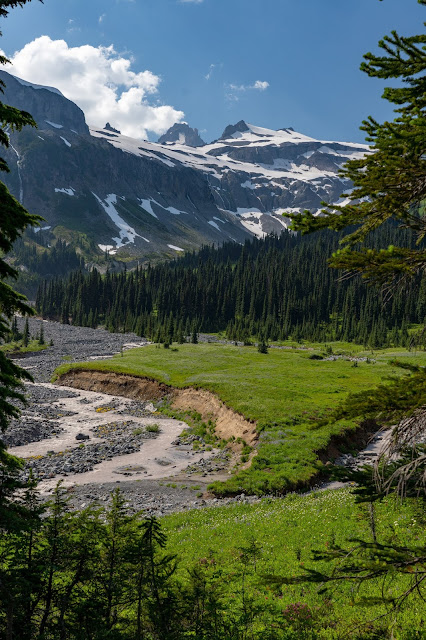 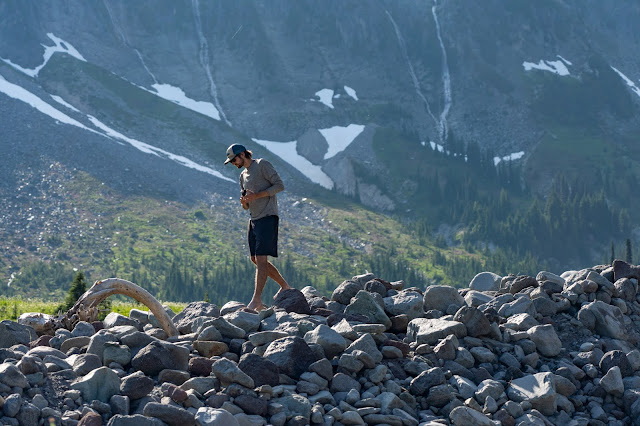 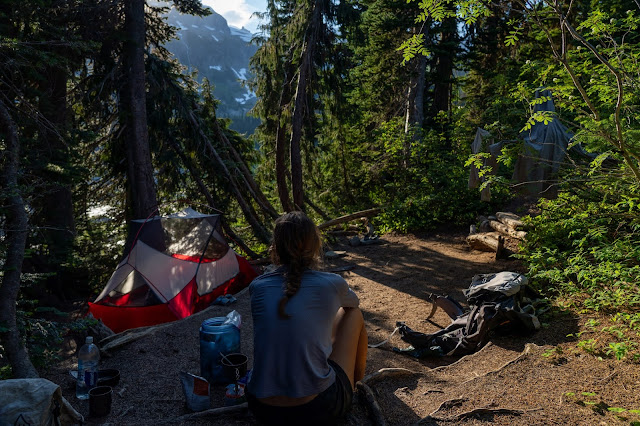 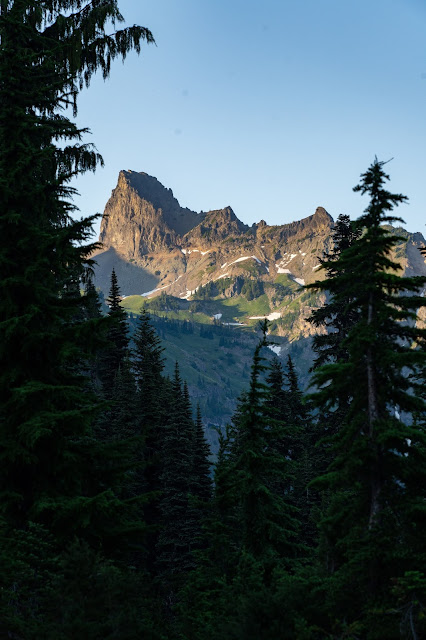